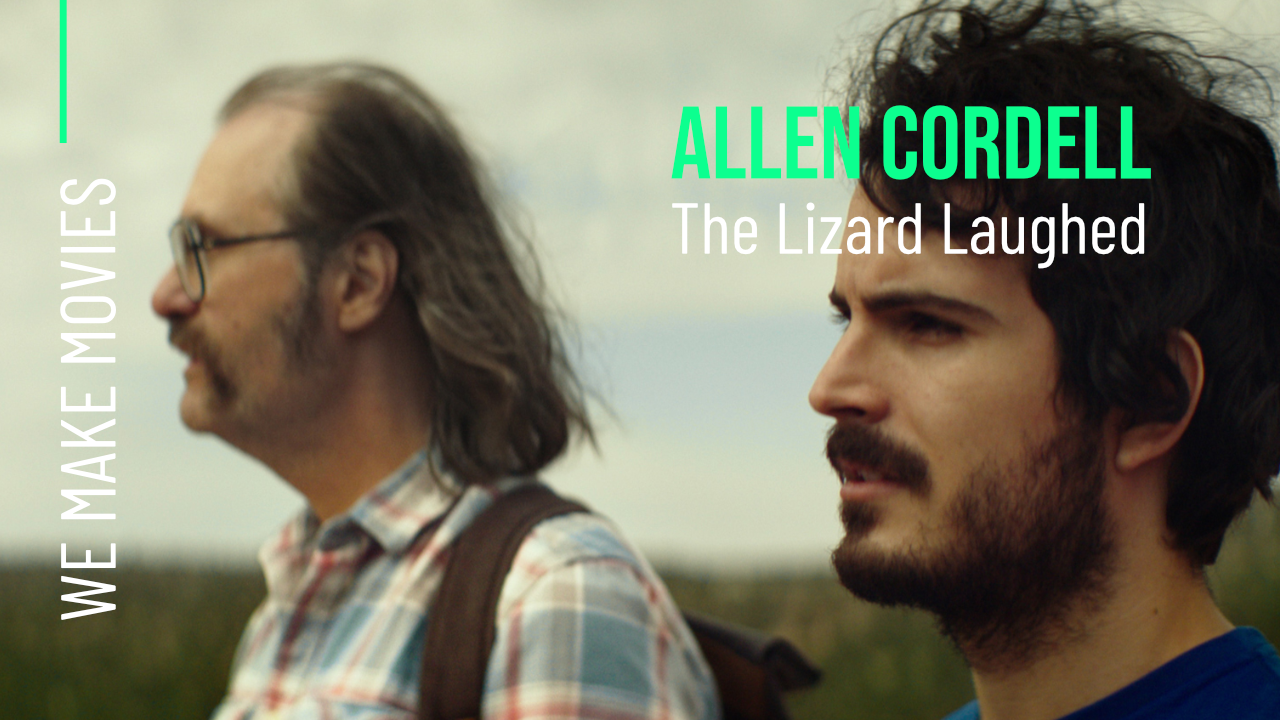 Allen Cordell's narrative debut The Lizard Laughed enjoys its world premiere at the Oscar-qualifying Florida Film Festival this week (April 8-17). Hailed as "a breathtaking love letter to New Mexico’s backcountry," the 21 minute film tells the tale of an awkward, confrontational reunion when Harvey gets an unexpected visit from Nathan, his son he hasn’t seen since abandoning him years ago. A comedy about feeling disconnected from the people who should be most important to us in life, the film is based on Noah Van Sciver's acclaimed indie comic of the same name.

We had a chance to catch up with the auteur-in-the-making to hear the backstory behind how this film got made and find out a little more about what makes Cordell himself tick. 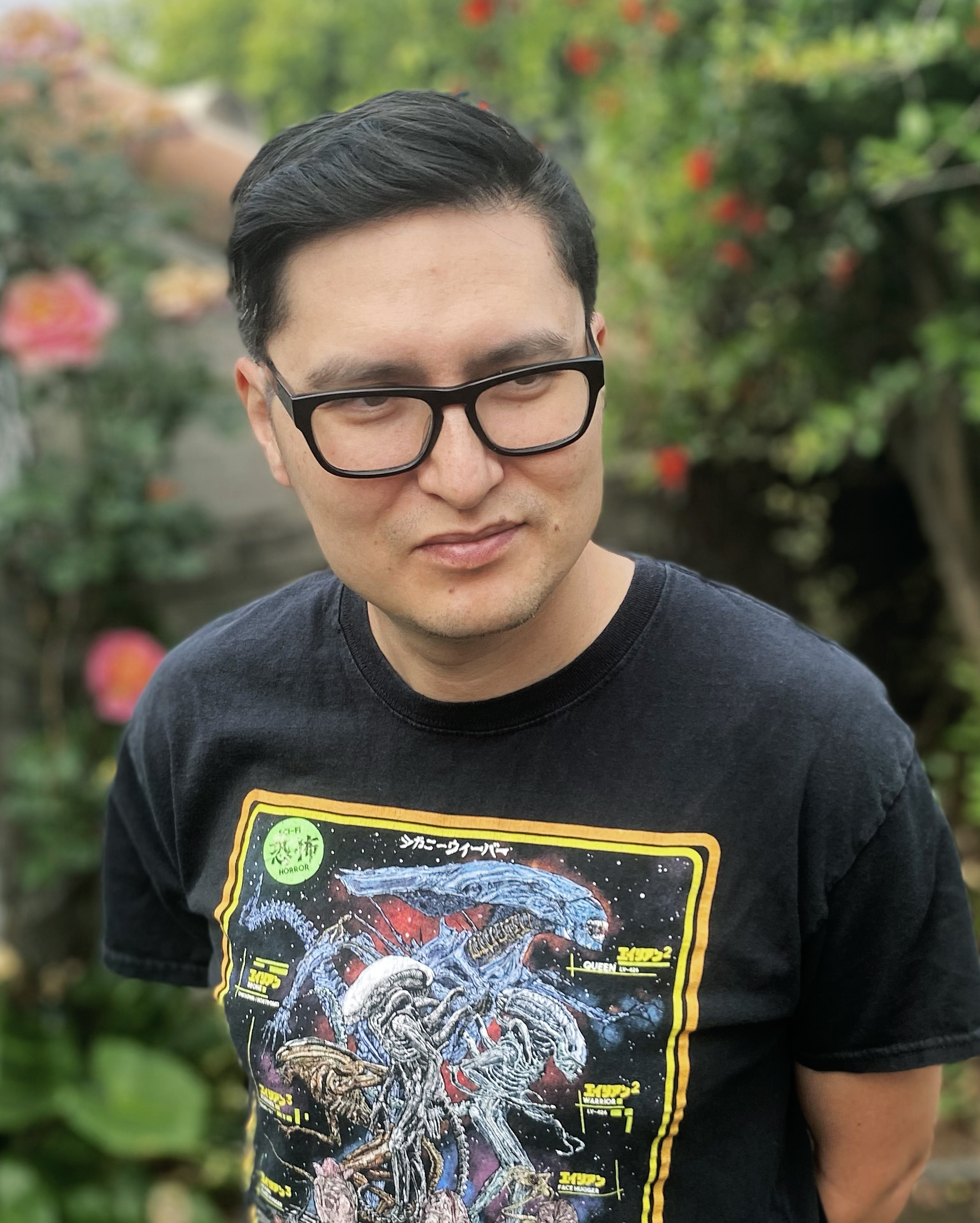 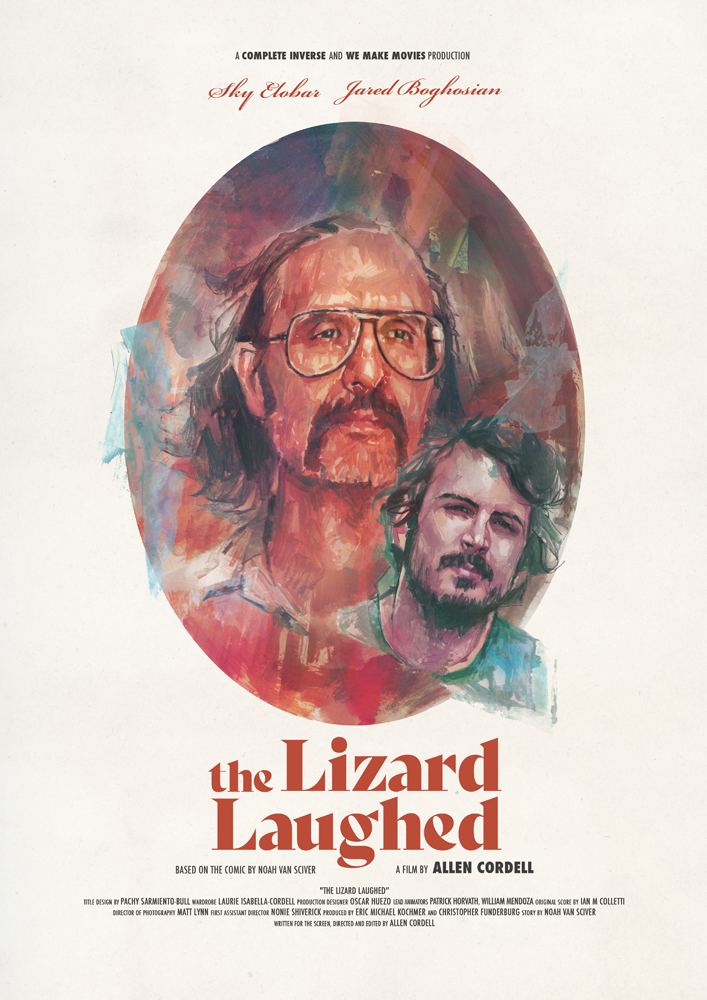 * The poster for the film was illustrated and designed by the brilliant Tony Stella.

AC: I discovered Noah’s work while reading an issue of NOW, the Fantagraphics comic anthology magazine. Noah’s contribution immediately struck me as relatable, cinematic and funny, so I sought other works by him. I got a hold of Disquiet, a compilation of some of his shorter pieces, and the first story in that book is The Lizard Laughed. As soon as I read it I knew I wanted to make it into a film. It felt like a film reading it. And again, it was relatable. I connected with the story of a Father spending a day with his estranged son. I mean, we all have parents, right? It’s a universal thing. My relationship with my parents is a little (as I’m sure it is for many)… complicated. There’s a history there, and sometimes it’s difficult to let go of the past.

So the story spoke to me and it seemed simple enough to execute (a rather poor assumption, lol). It seemed like something I could tackle as my first attempt at narrative filmmaking. I’ve directed a handful of music videos (for Beach House, Tobacco, Girl Talk and others), and worked as a content creator for the now defunct Super Deluxe. I’m basically known for making weird videos (by those that actually know my work). So this film is me showing that I can also tell a story that’s just about two people connecting. That not everything I make has to be surreal or insane. I wanted to make something relatable and universal. I wanted it to be beautiful in the way that Paris, Texas is beautiful. And achingly American, if that makes sense.

AC: Well, the first thing I did was contact Noah about optioning his comic. I’d never optioned anything before so there was a lot of Googling involved. I got advice from a few folks and eventually figured it out. Noah was hesitant at first as the story is very personal for him. The character of Harvey is based on his own father. But eventually he came around and agreed to let me adapt it. He put his trust in me so the pressure was on to do it right! But once I had the option in place it took me another three years and a couple of false starts to actually make it. There were multiple talks of crowdfunding along the way, but I ultimately chose not to go that route. I eventually saved up enough money and at some point was introduced to Eric Michael Kochmer, who ended up producing the film. Once he was involved it felt like a real thing that was happening, not just some distant dream lingering permanently in the intangible future somewhere. 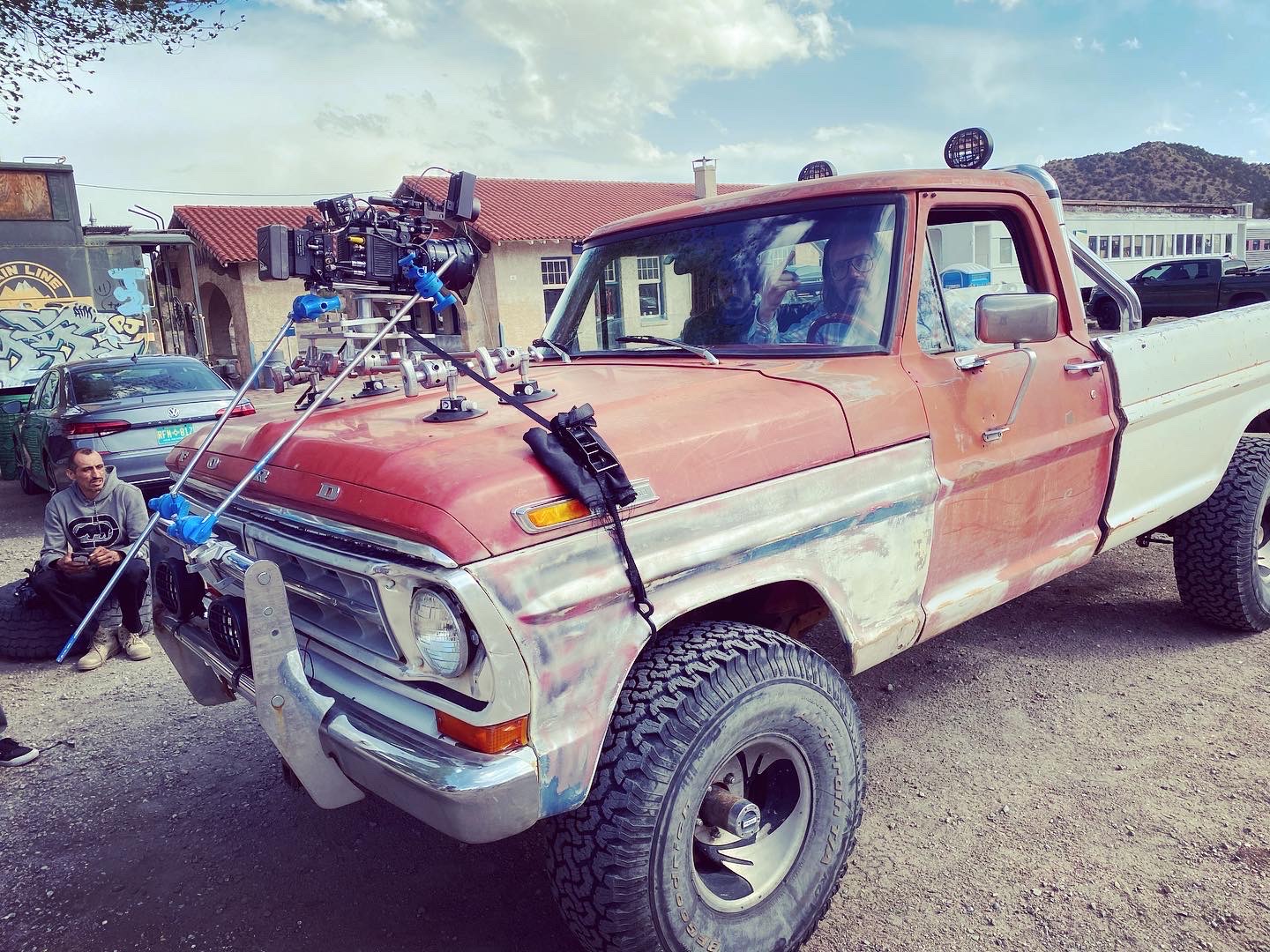 AC: Well, I naively thought I could make it for less than half of what I ended up making it for. But I’m pretty stubborn. I knew I wanted it to look a certain way, I wanted to film on location in New Mexico, and there were other aspects I just didn’t want to compromise on. But being stubborn makes the budget go up. That’s on me. I tend to make things harder on myself because I don’t like to compromise. I mean, after three years of waiting to make this thing I wanted to do it right. I wanted to execute it the way I saw it in my head, so skimping really wasn’t an option.

We ended up shooting the film with vintage Lomo anamorphic lenses, and they were huge and heavy. Like 30 lbs heavy. So popping them onto a steadicam rig to hike up a trail or climb down into a cave was really challenging. Also, finding a cool looking cave is near impossible! Who knew filmable caves were so hard to find!

AC: Eric Michael Kochmer, my producer, is a producer at We Make Movies, and he was great. If it wasn’t for him this film never would have gotten made. Also, Whit Spurgeon helped on the film and he also played Jim, Harvey’s friend in the cave scene. I loved working with him as well. Turns out he personally knew Noah, which was a funny coincidence.

WMM was indispensable. From handling all aspects of the production to helping negotiate with SAG-AFTRA, I honestly don’t know what I would have done without their involvement.

AC: I probably would have given myself a 4th day of shooting in New Mexico. It was a 3 day shoot there, and on the 3rd day I was told I didn’t have enough time to execute every shot I had storyboarded. But in the end this was a blessing in disguise… it forced me to rethink how I wanted to film the ending (with Nathan walking through the house in the dark), and I ended up shooting that at Fonco studios in Los Angeles a few months later. I think the film is better for it.

AC: I just want people to see it, connect with it, and want to see more from me as a narrative director. I want to make a feature film next, and if this short leads to that in any way it will have been worth all the effort.

AC: People who like good movies! But seriously, I think anyone can watch it and enjoy it. I recently watched it with my in-laws, and even they liked it! I was inspired by filmmakers like Paul Thomas Anderson and Jim Jarmusch. Hopefully people who like their stuff will watch The Lizard Laughed and get something out of it, but I know they’re the best and I’m just a wishful thinker.

AC: Oh boy, what a heavy question. I think more relaxed shooting schedules spread out over more days would be great. More diversity and inclusivity on set. And more public funding for up and coming filmmakers. 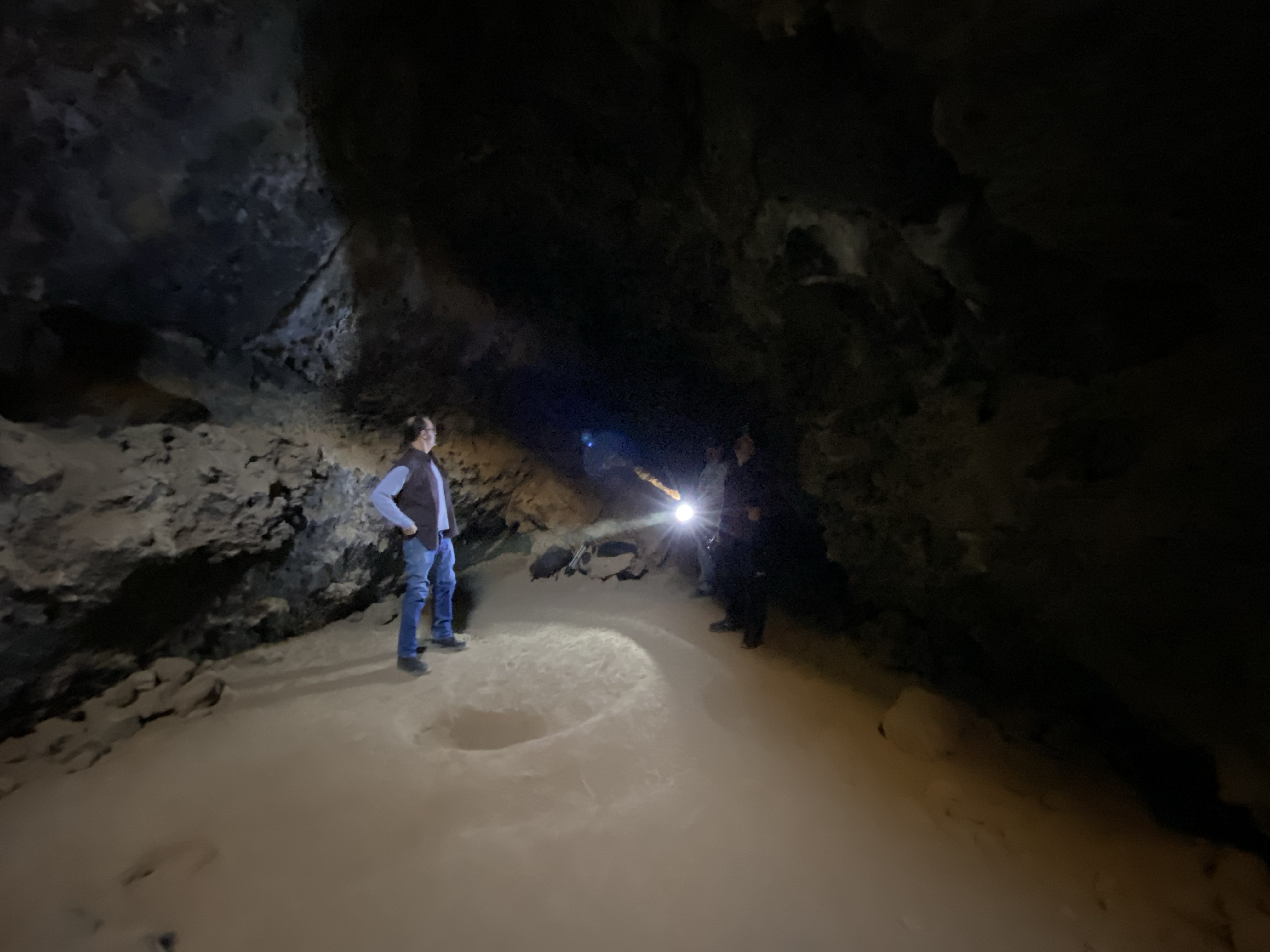