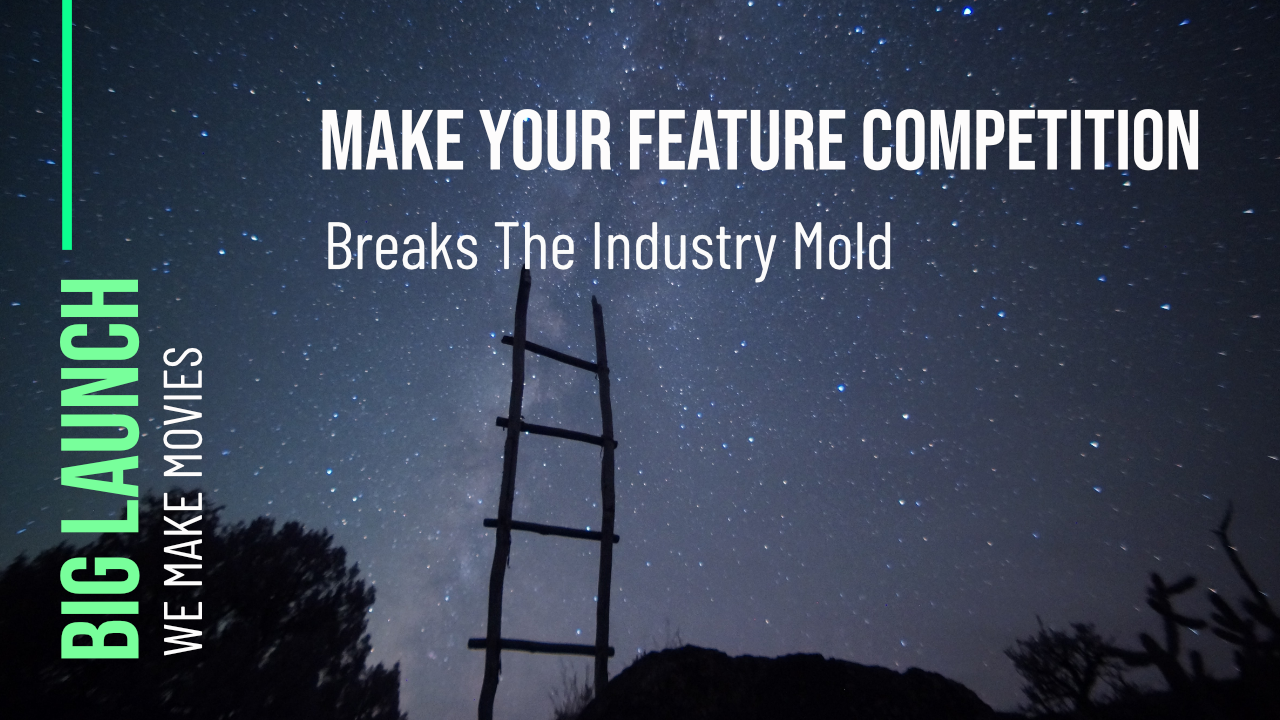 In a sea of film competitions that award starter funds, offer packages towards gear, and sometimes even promise gateways of access to the elusive industry at large, We Make Movies is breaking the mold. We are helming a micro-budget feature film competition - THE MAKE YOUR FEATURE COMPETITION - that will see your project through completion by actually making your movie for $25,000.

WMM has joined forces with investors from Silicon Valley, in search of multiple projects from inventive and resourceful filmmakers. Filmmakers will submit their feature film treatments (stellar concept or completed script) and pitch to investors and the WMM community for the opportunity to develop their story, from inception to completion. At least two winning filmmakers will land cash  investments of $25,000 each, in addition to tens of thousands of dollars worth of resources in the form of services, equipment, and more. WMM and the investors will partner with winning filmmakers, as project co-owners to produce the films in early 2022.

"There really is no other competition that we know of that allows you to pitch directly to an investor and that then puts you into an incubator, or more accurately, an accelerator that shepherds you through the full process of making the movie and getting you to your premiere," states Sam Mestman, CEO of WMM. In this Shark Tank meets Project Greenlight type competition, WMM & investors will finance your film for 25K, develop your film, produce your film, release your film, and get your film ready for distribution. "Every step of the way, you’ll be part of a guided process, and you’ll be working with a community of people who all want to see you knock it out of the park. Most independent filmmakers have to go out there and kind of just 'figure it all out'. With this competition, the winners will be able to focus on the creative process over all of the bureaucracy of making a movie."

The competition is borne from the values of the WMM community, which place great importance on community building and support. Helping the community is helping yourself. We have always been of the mindset that filmmakers need to take the reigns and create opportunities without asking for permission from the industry at large. Always deliver on your dream and make the movie that you want to see. We espouse a DIY attitude, cherish the indie spirit, and believe that creating quality content is not contingent upon wealth, status, or any of the other barriers previously upheld by film schools and studio systems. Quality equals making the most of your resources. Content creation has become democratized and meritocracy has a fighting chance.
In the tech world and the realm of venture capitalism, solving problems is a prerequisite, innovation wins, and collaboration is paramount. Investors are desperate to find passion, novelty, and authenticity, alongside skill, work ethic, and vision. The same way Y Combinator (responsible for investing in tech giants such as airbnb, Dropbox, and Instacart) created a new model for funding early stage startups, WMM and our initial investor (who we will share in the coming weeks) aim to create a new model for the way films get funded... and made. The entrepreneurs, developers, and inventors got the opportunity to focus on what they did best, while the investors provided a financial base for those dreams to be realized.

VP of Production, Eric Michael Kochmer co-created the bones of the competition with the goal that filmmakers will just get to be the artists that they are, without the heavy lifting of pre-production, production, post-production, or securing financing or their films. The investors will foolproof the productions by curating the projects they feel are rife with passion, novelty, and authenticity, while WMM will develop and provide skillful support in all areas of production and execution of the film - preserving and highlighting the vision of the filmmakers.

Launching a Methodology & The Future of the Accelerator

The Make Your Feature Competition is designed to prepare filmmakers for the modern world of digital content creation. Not only will the winning filmmaker get to work with experts on "the bleeding edge of film technology and workflow" Mestman professes, but his hope is that this competition calls forth "incredibly creative independent films that bring back the spirit of something that has been lost in cinema in recent years... designed to bring joy to an audience and make people feel something." Make it fun, while you make it. It's a world far less concerned with views, clicks, and  popularity, in favor of integrity and authenticity. "I’d like to see people wake up to the idea that all of the technology and creativity in the world is at their fingertips and there is nothing separating them and their talent from making the movie they want to see… and then sharing it with the people they care about most."
The competition pledges to catapult the process of making a feature film for a few lucky winners, but several filmmakers who submit early enough may also be privy to the added bonus of gaining feedback on their submissions. Investors are looking to hand-pick promising treatments and provide one-on-one feedback via Zoom, then allowing the filmmakers to resubmit if they choose. The experience intends to expose filmmakers to the real world process of pitching and equip them with the realities of dealing with those expecting a return on their investment. The perks of this engaged approach is critical for the success and development for both the filmmakers as well as the investors. It necessitates respect and true collaboration between creatives and financiers.

As a filmmaker, producer, and curator of the competition, Kochmer wants this to become "an annual incubator/accelerator program for WMM, with a group of investors funding 5-10, maybe more, projects. If we create an environment for investors to be comfortable by presenting them with an array of projects to choose from so they can find a few projects / artists they are excited about investing in, then be able to vet them further through the feedback process, AND they know that their resources won't be wasted because we are producing them," this will be a top notch model.

In the tech world, an accelerator is an organization created by experienced tech entrepreneurs to help early-stage tech companies develop their product, hone their business model, and connect with investors. What WMM is doing through the Make Your Feature Competition is nothing short of a filmmaking accelerator. We are cutting through the red tape and oftentimes laborious process most filmmakers are subjected to in realizing their dreams.

WMM President Aubrey Mozino is thrilled about giving "filmmakers a chance to get out of the development vortex and actually get onto set making the movie they want to see." WMM
already comes with an in-house fanbase, a community of like-minded creatives hustling to make their films. With the efficacy of an "experienced full service production company working alongside the filmmakers to assemble the right gear, crew, resources and exhibition opportunities" WMM offers incomparable assets to the community and ultimately those awarded through the competition.

Members Only Never Sounded So Good

All of the above, for the modest price of membership. We Make Movies Silver members get one free submission and Gold Members get two. We truly are the community that keeps on giving, whether it's in the form of our weekly labs, our Smartphone Studio, our filmmaking library of tutorials, or the opportunities we present. Perhaps Mozino sums it up best when she says she loves "that We Make Movies inspires writers to become directors, actors to become writers, and many of us to become multi-hyphenates who are taking back control of our careers."

Mind blown? Excellent. If you're not a member yet, we're not sure what you are waiting for. Let us know your thoughts. Oh, and by all means, submit your treatment.