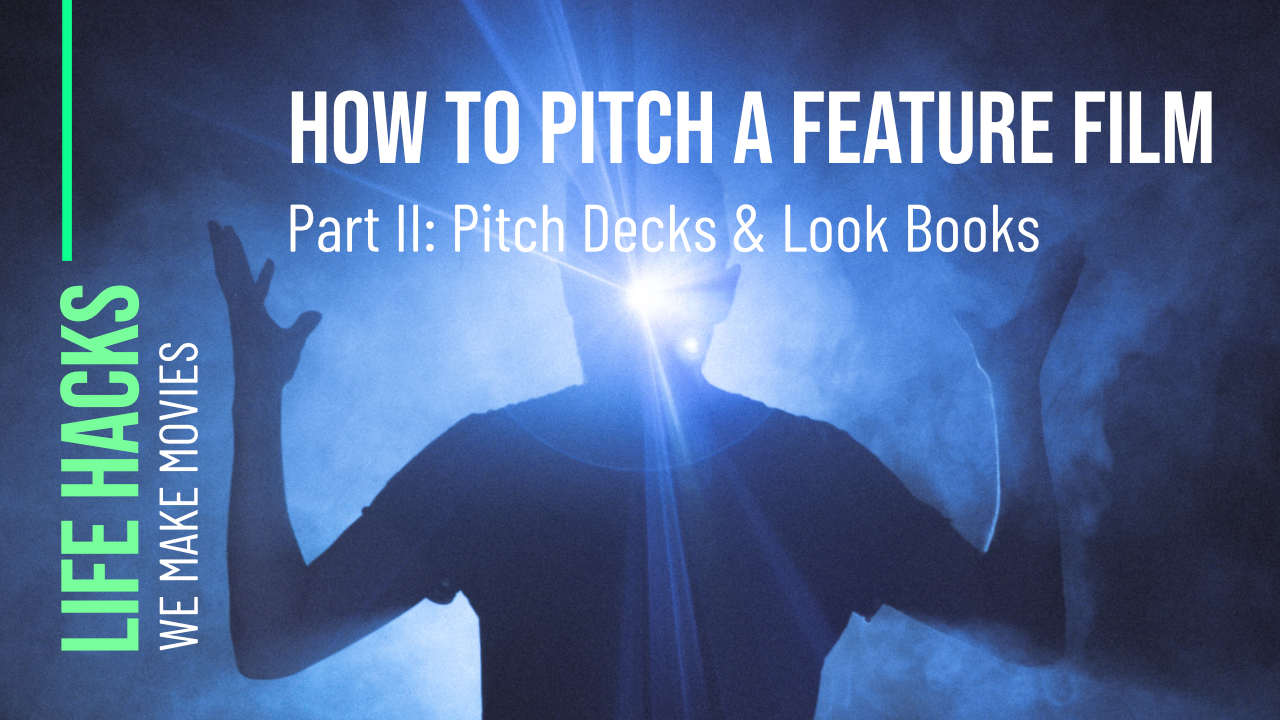 As our Make Your Feature Competition submission period is coming to a close, we will be narrowing down our choices for the semi-finals. While the initial submission process only required a treatment of the film, the next round of selections will be based off of a virtual pitch to the community, as well as a few requisite presentation materials. The first is a beat sheet (covered in PART I of this series) along with an artistic primer (a statement describing the intended genre, visual style, similar films, approach to production, and tone of the film), and the second is a version of either a look book or proper pitch deck (both covered below).

What Is A Look Book?

A look book is a compilation of film stills and other visuals that communicate a filmmaker’s vision for their project. Cinematic elements such as composition, lighting, production design, and color help to convey the mood and tone of the film. Similarly, characters and setting can be rooted through casting choices and locations. A look book captures all of these artistic choices  for inspiration (like a Pinterest board) while also concretely representing what the project is aiming to look and feel like. There is no singular way to create one but here are the potential items that can be visually delineated through one.

What Goes Into A Look Book?

What is a Pitch Deck?

The term "pitch deck" emerged from the startup culture of Silicon Valley as the premier mode of  presentation that entrepreneurs used to pitch potential investors. Hollywood has followed suit with screenwriters using the format to pitch spec scripts and filmmakers using them to apply for grants or pitch their projects to potential investors and distributors. It has become an essential agent to complement a screenplay, further a film’s creative development, and communicate ideas, concepts, and imagery to potential collaborators.

A pitch deck goes beyond the look book (although a pitch deck can contain a look book within its structure) in that it reveals how the film will look and feel (tone, genre, style), who the film is for (audience), and why this film is special (inspiration, relevance to current times...). It is a deeper dive into the finer points of style, tone, visual inspiration, casting, location, and crew. And ultimately, it’s a sales presentation for a film. It should guide investors, distributors, donors and the like to visualize the project as well as gain a better understanding of who the filmmaker is.

You can tailor your pitch deck to accommodate your audience, but it is generally good to have one deck that can be accessed by anyone looking to fund, donate, distribute, or work with you on your film. For example, if you are clamoring to collaborate with a cinematographer on a particular project, they will be most interested in the look book portion of your deck, the locations you have in mind, any references to films that match the look you are going for, and any gear you are considering to achieve that look. However, a DP could also benefit from the complete pitch deck to garner the larger picture and be able to make an informed decision on whether they think they can contribute their best to the endeavor.

A note from Sam Mestman: The bottom line is to not lose sight of the fact that you are selling your vision. Don't get lost in the weeds. You need to explain the WHY of this movie, why this STORY, why this FILMMAKER, why does the world need this movie? You also need to sell the plan on how this movie is doable and how you will deliver on what you say you can pull off. Your slides should match up with the world you are building. Sell us on the world. Connect the left brain and the right brain and let us know who your target audience is.

If there were to be a “master list” of items to add to a pitch deck, it would be the following:

A good pitch deck should leave the investor, distributor, or donor feeling like they know exactly what your film will look and feel like. It should inspire confidence in your vision, your team, and your collective abilities. They should not get lost in a wall of text or dialogue, but instead be given a taste of the visual palette they should expect from the film. A standard film pitch deck is formatted as a series of slides (Keynote, Canva, Affinity are all solid choices to create one in) and is often shared as an exported PDF. Online, interactive, and web-based decks are also gaining traction, though having a simple PDF version for easy sharing is indispensable.

Now, go forth and make the film that you want to see!