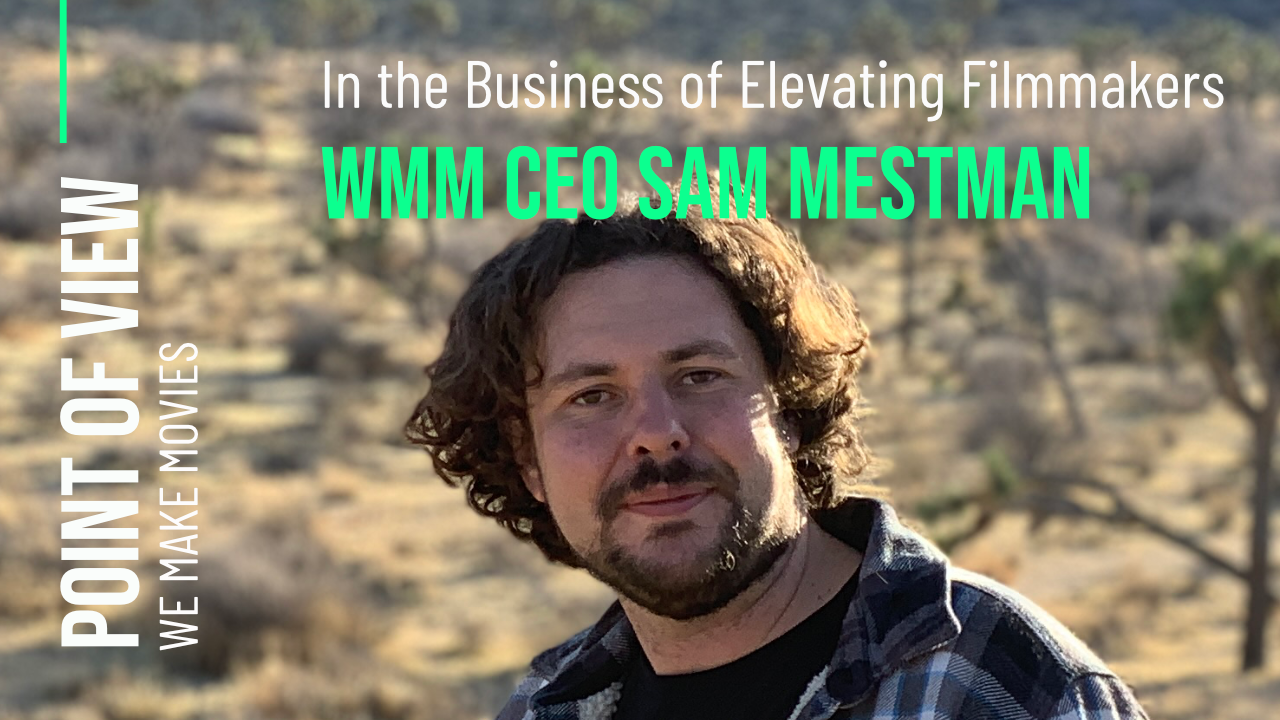 Filmmaker. Workflow Architect. Founder. Entrepreneur. And now, investor. The nomenclature is less important. The bottom line is that Sam Mestman, CEO of We Make Movies, has made it his mission to make an impression on the filmmaking world by bolstering storytellers, instituting an affordable and quality driven process around content creation, and ultimately shattering the myth of the false dichotomy between business and creativity. He has worn many hats throughout his career, but no matter the hat, Mestman is in the business of helping people.
His personal journey begins with a colossal heartbreak over his first feature film out of NYU film school, in which the issues had nothing to do with the film itself, but a system that was set up for failure. WMM was born out of this deep frustration, while he continued to work in the industry at large as an editor and colorist. In the process, the first iteration of his former company LumaForge (which has subsequently been sold to OWC) was formed, as he saw a need for better workflow management and sharing. Simultaneously, he co-founded FCP Works, an Apple Pro video community that focuses on integrations and education of the FCP ecosystem.

SM: We are Sillicon Valley for Filmmakers. We are their incubator, their Y-Combinator. With the Make Your Feature Competition we are changing the rules for filmmakers. You have a great idea for a movie and a way to make it cheaply? We want to hear from you and help you make it happen. Period. Submit your movie, bring your A-game, and lets go. We want a full meritocracy with no excuses, no whining, and no gatekeepers. We want to create a place where talent can win out, where interesting movies get made, and where star power and money do NOT trump creativity, hustle, and talent. We want a meritocracy and an entrepreneurial spirit.
Not only that, though, but our goal here is to help challenge you to make you into a better filmmaker and make better movies. We want to give filmmakers a support system, and we want to give them coaching throughout the process and developmental tools to build the BEST possible story. Vision isn’t enough. You need to be able to have your ideas be challenged and withstand criticism with solid reasoning and ideas for WHY you want to do what you want to do and for why what you want to do is the best idea and actually possible to be done in the real world with the resources you have. Our goal with this is to treat filmmakers and creatives like business people who have to RUN a business, or in this case, a movie. It’s not good enough to have a great idea for a business/movie. Most businesses AND movies fail. You have to be able to execute and have a plan for how you are going to bring your business/idea/FILM to life. We want to bring a startup mentality to film. It’s an idea whose time has come and we plan on executing on that at a very high level with everyone we work with.

WMM: What is it about the MAKE YOUR FEATURE COMPETITION that excites you the most? How do you think we are revolutionizing the climate for filmmakers through this process and why do you think this is imperative to the direction and development of WMM?  What are you hoping to achieve (in the larger picture) through this competition?
SM: The Make Your Feature Competition is going to put filmmakers in a position to succeed in a way that no one else has done before. Not only will we implant a tech startup mindset to this process, our goal with this is to build a true minor league talents system for films and a crowd sources sustainable way to give new, deserving a voices a chance that is done completely at a grassroots level.
More specifically, we are trying to put proper guard rails on the independent film process. Most indie films fail because it’s impossible for them to have all of the pieces in place to make something that competes with Hollywood. However, we’ve done the process work for you, and what we will do for you is give you access to Hollywood level workflows, development, services and support at indie rates. That is the true game changer. We are taking Hollywood’s approach and making it affordable to ANYONE.
In our current world, investors and creatives are at odds with each other, and neither side feels like they can trust the other. Creatives feel exploited by investors and people with money just want to crush their dreams and ruin their movies. Investors on the other hand, feel like filmmakers are just desperate parasites who want to take their money but don’t want any kind of accountability for how it’s spent. We Make Movies' goal is to be a balancing force between these two ideals. We want to give filmmakers a place to find financing and develop their voice, career, and properties in a way that feels authentic and in line with their values… and we want to give investors a safe place to find incredible talent who actually WANTS to be be accountable for making something awesome and making their investors proud they put money into a movie… and to invest in an infrastructure where everyone’s interests and concerns are met. We are creating a system that is great for creatives AND investors with a process and approach that is extremely efficient and designed out of more than a decade of blood, sweat, tears and above all, pain. We have built the process and approach that no one ever gave the creative people at We Make Movies, so we made it ourselves, and our goal is to now bring it to the rest of the world so more great stories start getting told again.
WMM: You are one of our judges / investors for the MAKE YOUR FEATURE COMPETITION (surprise, everyone)! What captures your attention when you are deciding whether or not to invest in a film?
Break the mold, do something awesome that can fit WITHIN the prescribed limitations we are purposefully being imposed on the applicants, and you’ll have my attention. If you double that down with a willingness to hustle, a desire to make something great, and a collaborative spirit, you will get my attention.
DO NOT SAVE THE CAT and give me another tired paint by numbers movie where I know what’s going to happen 3 scenes before it happens. Bring something simple and inspired that you’re willing to craft into a diamond with us and lets go make something awesome.
Written by Sapna Gandhi
Sapna Gandhi is an actor, singer-songwriter, and content creator. In addition to TV credits such as BOSCH, SHAMELESS and SCANDAL, she has appeared in numerous shorts, features, and series, including festival darlings IN ABSENTIA (Raindance) and THUMPER (Tribeca). Gandhi has produced several series and films under the umbrella of her production company Elegant Grotesque (most recently SCRAP, starring Anthony Rapp and Vivian Kerr, and Noel Gallagher’s High Flying Birds’ STRANDED ON THE EARTH, directed by Mike Bruce). She is also 1/2 of the musical duo, VATAVARAN, was born in England, raised all over the states, studied English and Women’s Studies, and trained at the American Conservatory Theatre in SF.