Love Is Literally A Fire With Director Sofie Somoroff 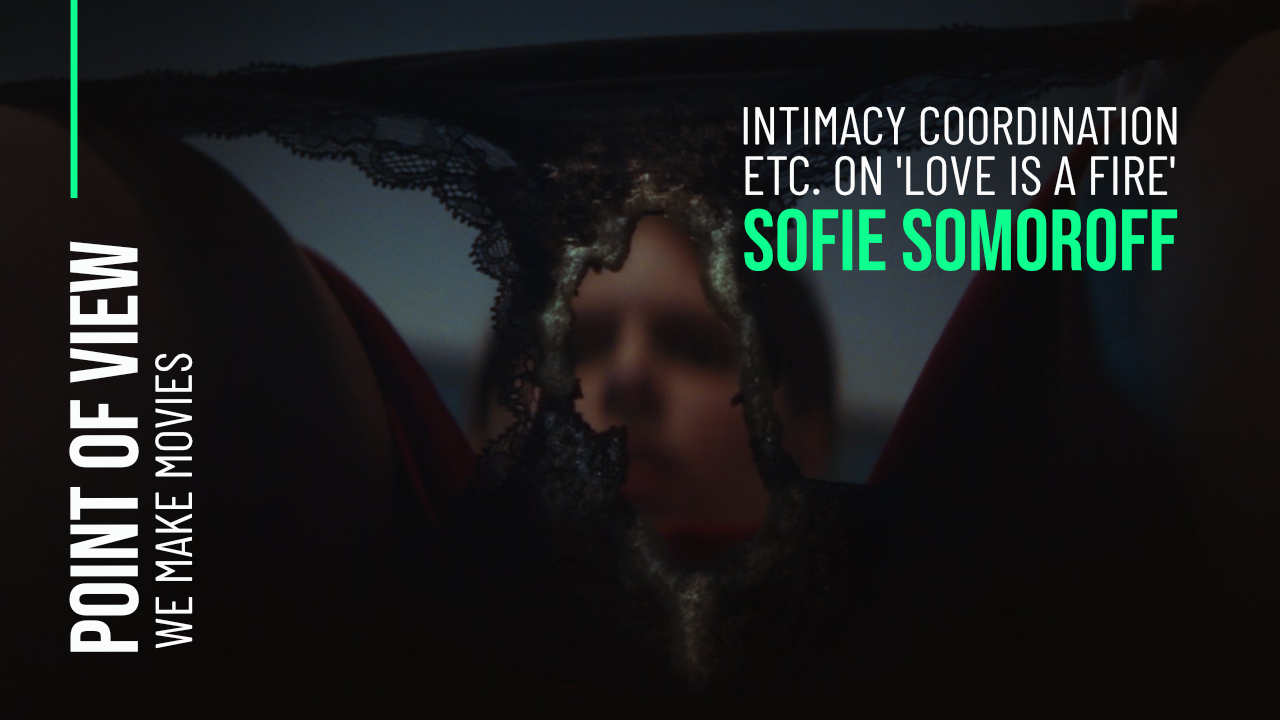 “Soon after moving in together, a couple is forced to confront their challenges with intimacy, exacerbated by a toxic yeast infection and deep rooted insecurities, as their relationship slowly devolves.” No matter your cinematic sensibilities, if that logline doesn’t pique your interest in director Sofie Somoroff’s short horror film Love Is A Fire, you may need to check your pulse. With a world premiere at the end of this month at Portland Horror Film Festival, the film will also enjoy a run at our We Make Movies International Film Festival this October.

No stranger to films centered around coming to terms with bodily functions, Somoroff’s directorial menu includes a series of musicals; My First Night In Los Angeles about a girl learning self-love while crashing in her friend’s living room, and My Worst Night In Los Angeles about needing to eliminate (yes, her bowels) while on a Hinge date. To follow with a film about an acidic yeast infection only seemed natural to the native New Yorker, who received the honor of being named a Woman of Distinction by the New York State Senate.

We just had to know more. Find out how Somoroff prefers to cast her films, get a look inside her overall process, and check out how she pulled off this most intimate of films in the middle of a pandemic. Don't forget to check out the trailer at the bottom.

SS: Honestly, it was inspired by a moment when I went to the bathroom and looked down at my underwear and there was a hole in it, and I thought, “Huh, what if that was from a yeast infection?”

I’d also been wanting to make a project featuring intimacy for a while — a lot of my favorite movies and TV feature sex, intimacy, and complex relationships in really fresh and interesting ways, and it was something I was keen to learn more about as a director. I put the two things together and this is what we got! 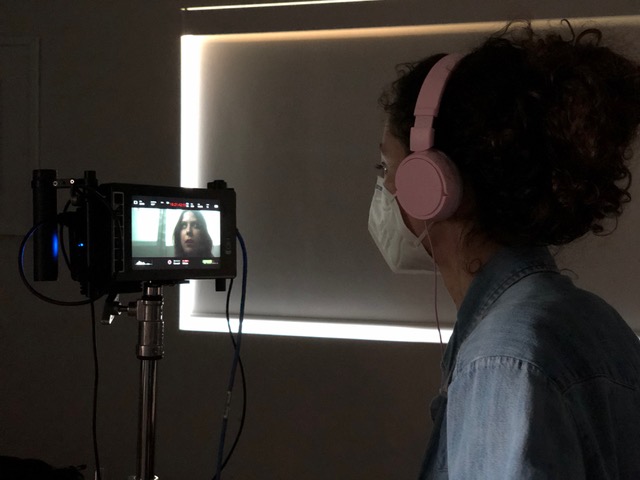 WMM: What was the casting process for this film? What did the breakdown look like?

SS: Casting was exciting because I wanted to find a really collaborative team to build out this story and make sure everyone felt comfortable from the onset.

Celina is one of my best friends (and roommates at the time!), and has starred in the majority of my work to date! She helped me develop the script and had known of my interest in making something that had intimacy central to the story. Because we’d worked together so many times before, there was a mutual trust there that extended to telling the story and of course helped when performing something so vulnerable.

Kenny had auditioned for another friend's film a few years ago (Celina happened to cast that film, and my production designer, Shane, was the director). His tape for that project really stuck with them, and they had the great idea to reach out to him. I cold emailed him explaining our connection, and asked him if he would read for the role. We also had a discussion about the needs/my vision, our collaboration with a certified intimacy coordinator, and I also explained my priority for the cast to feel safe and comfortable first and foremost. Kenny was so eager to dive into it, and even had experience with wearing comparable prosthetics before.

I truly couldn’t imagine two better actors to have made this with!

WMM: Did you use an intimacy coach?

SS: Yes - I worked with IPA (Intimacy Professional Association) who connected me with Chantal and Rebecca. Especially as a first time director of this kind of intimate scene, they were so willing to work with me and teach me about the process. Rebecca, who was on set for the shoot, helped us craft these scenes in rehearsal, and facilitated a safe and positive environment on the day. The best part of making this were those scenes. They were so challenging, but so much fun. I think one of my favorite moments in production was calling cut after the really intense beat at the end of the second intimate scene and just seeing Celina and Kenny laughing between takes. It really felt like we were all just having a good time, and that wouldn’t have been possible without Rebecca there. 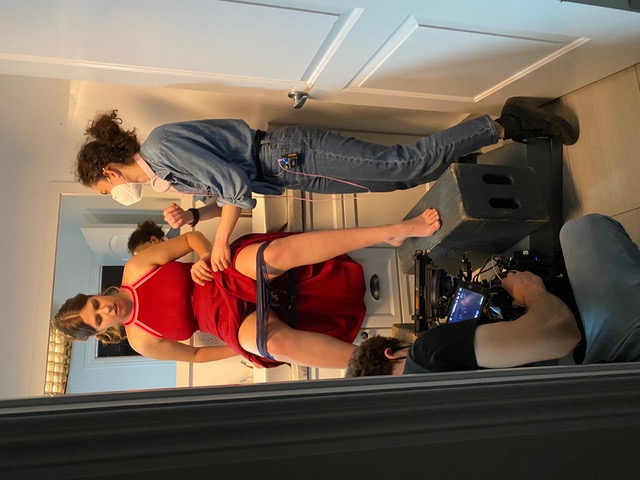 WMM: The special effects are incredible and the story relies on the accuracy of those effects. How did you find your crew to execute that?

SS: It was pretty crazy! I had unfortunately lost my original SPFX/Makeup artist a little over a week before production. It was a very stressful curveball for one of the most important parts of the movie. Luckily, she found a stellar replacement — Rebecca Hurwitz —  who ended up really rising to the occasion and making the prosthetic with the limited time/resources we had. It’s a good thing silicon dildos are fairly easy to come by — and that Rebecca mangled it so skillfully — otherwise I don’t know what we would have done. The other big challenge was the prosthetic in an intimate area. Rebecca Johannsen (our intimacy coordinator), was instrumental in creating a safe and consent-based environment for both the actor, Kenny, and Rebecca, the makeup artist. I’m still reeling in awe of how committed they were to making that moment as good as it is.

SS: WMM was so helpful with insurance and various production logistics that can be harder to navigate for smaller scale productions like this one. Especially as my first production in Covid times, Eric was a hugely helpful guide in how to mount this production effectively. We could not have made it without WMM. 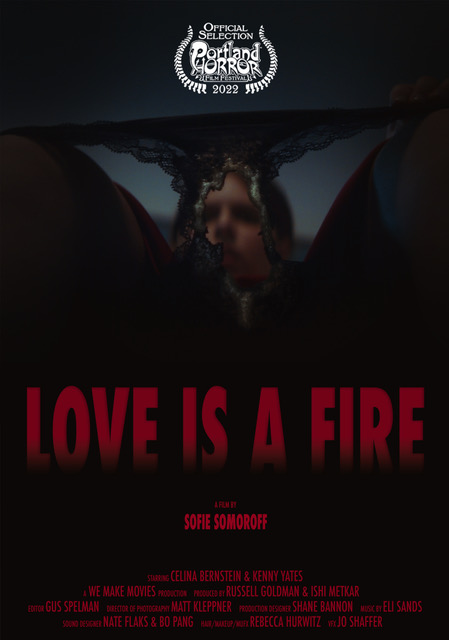 SS: I would have loved to have one more day to shoot it. It was an ambitious schedule to achieve in 2.5 days, and I think giving us some more room to play, and more coverage in particular, would have allowed more opportunity to hone in on the emotional journey in the cut. That said, Gus (the editor), really found the heart of our story in the edit and I’m happy with how it turned out.

SS: I hope it’ll play some of the many fantastic genre and horror festivals out there, and hopefully some local LA screenings. I’m thrilled to say it’ll be premiering at Portland Horror at the end of this month! My main aspiration for this movie is to watch it in a theater with an audience and hear their reaction to the end. Beyond that, who knows?!

SS: I hope it’ll find its way into the hands of horror fans. That said, I’d like to think the relationship at the center is relatable to many, so I hope all sorts of people connect with it.

SS: I try to focus on the little things I can control in my own sphere, like hiring practices, maintaining a positive and respectful workplace, and taking care of the cast and crew to the best of my ability. If I ever have the opportunity to mount a large production of my own, I plan to retain those values, and hold my peers and collaborators accountable to do the same — just as I assume and hope they will do for me.

Love is a Fire Trailer from Sofie Somoroff on Vimeo.