How To Make A Feature Film For 25K 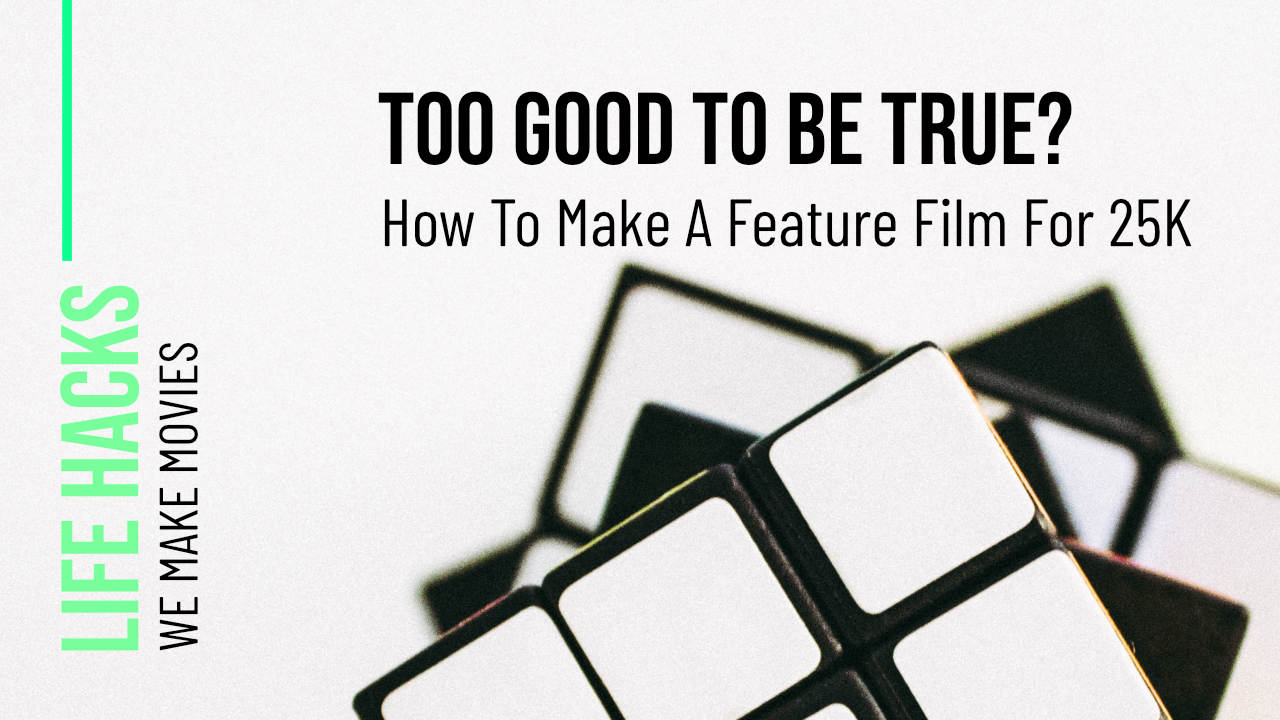 Few feature films have racked up cultural significance or conquered cinematic feats while made on ultra (ultra, ultra... ultra) low budgets. There's the 1977 experimental, horror masterpiece that is "Eraserhead", which was wildly celebrated auteur David Lynch's 10K  budget debut into the realm of feature filmmaking. There are the found-footage horror gems "The Blair Witch Project: (made for 25K) and "Paranormal Activity" (made for 15K), the neo-Western action film that put Robert Rodriguez on the map, "El Mariachi" (made for 7K), and the clever neo-noir "Following" (made for 6K) by a then novice Christopher Nolan.

Then there are the directors who made their impression on the indie film world with their low-budget contributions, oftentimes shaking up what was considered acceptable and palatable for large audiences. There are a handful of 90's cult classics that delivered filmmakers like Kevin Smith ("Clerks" - made for 27K), and his predecessor Richard Linklater ("Slacker" made for 23K) to the zeitgeist. The early aughts brought us the Mumblecore movement, made famous by the now prolific Duplass Brothers ("The Puffy Chair" - made for 15K), Joe Swanberg (Kissing On The Mouth" - made for 3K), and documentary-style filmmaker Nathan Silver ("Uncertain Terms"). Super niche genre films such as the gritty sci-fi psychological thriller "Primer" (made for 7K) by Shane Carruth, and uncomfortably delicious films like "The Color Wheel" and "Queen of Earth" (both shot on film for less than 50K!!!) by Alex Ross Perry, also made a mark.

And then there is our very own Eric Michael Kochmer (WMM VP of Production), whose fourth feature film "Her And Him" (starring fellow WMMer Susan Louise O'Connor and alum Chris Frederick) will debut on the film festival circuit later this summer. Kochmer is known as our in-house avant-gardist, epitomizing the values of both DIY and low-budget filmmaking. He also happens to be (by no accident at all) at the helm of our MAKE YOUR FEATURE competition.

And how do we (WMM) think you can make a feature for 25K? Some thoughts...

Write stories that don't require large casts or tons of background actors. We're not saying you have to write a kitchen-sink drama with two characters pontificating the meaning of life (but also, why not?), but perhaps don't have a flash mob appear in one of your scenes, or create a world in which there are enough characters to rival a Marvel film. (Bonus: Less cast also means less mouths to feed.)

Aim for a basic skeleton crew. All you really need is a cinematographer, location sound recordist, gaffer (depending on the aesthetics of the film) and maybe a few key people to level up the artistic elements that will elevate the film (production design, costuming, hair & makeup). On a low budget set it is normal to have crew wearing multiple hats. So sure, your first (and only - ha) AD may double as your script supervisor. Your DIT person may also set up crafty at the top of the day. (Bonus: For a Covid compliant film set, you are going to want less people anyway.)

Work With Those You Know (And Trust)

In considering cast and crew positions, start by tapping into the people you already have a strong working relationship with. This sounds like a no-brainer, but you would be surprised at how many people reinvent the wheel each time they work on a new project because they want to expand their filmmaking circle or collaborate with the next up-and-coming-so-and-so. One way WMM has built a sturdy reputation is by continually collaborating with the same artists who helped us make our previous projects great.

You need a cast and crew that understands your vision, is going to have your back, and will work to make your project the best it can possibly be. You want people who not only demonstrate a skillset and working knowledge of whatever craft they are hired for, but also share the same values on set. Having a solid foundation of camaraderie, respect, and good communication is key to an efficient experience on set. (Bonus: There are three films. The one you write, the one you shoot, and the one you edit. Finding consistent collaborators in the post world is also paramount to saving you time, money, and your sanity.)

Minimize Your Locations & Consider Your Network

In the writing process, consider how many locations (read: company moves) there will be. The more locations there are, the more days you will likely need to shoot for (see the next section). Choose locations wisely from the start. If a scene can just as easily take place in a backyard (as opposed to a public park) then make your life easier and place the scene in a backyard.

In considering locations, start by using what free ones you have available to you in your back pocket, then consider favors from friends and family who might be willing to donate a location to help fulfill your passion project. Paid locations or studios are always an option for highly specific sets, but be conscious of how quickly they'll eat up your budget.

Similarly, if you only have one location in your story, but that location is a roller rink, consider how fast that will rack up on your line budget. Even if your favorite uncle owns the rink and wants to give it to you for free, he would likely have to close the location down for the amount of time it would take to shoot safely (which not too many people would likely be willing to do).

(Bonus: Kudos if you can use one location for two seemingly different locations - ie: a bachelorette scene occurring in a day spa is really a lovely en suite bathroom in your best friend's mother's house - who's house you are also using for the backyard scenes where the wedding takes place.)

Shooting days should try not to exceed more than 10-15 days. The more days you have on set, the more money you spend (on rentals, crew, cast, food, locations...) no matter how many corners you cut. You may have to shoot more pages than usual on any given day, but with a dependable and minimal cast and crew, and minimal locations, this should be easier to manage.

One way to shoot things in a cost-effective way would be to scatter the shoot throughout several weekends or even over several months. It is sometimes the only way to secure highly talented people (who may work in the industry at large) to work on your film. If you need help with planning efficient scheduling - we've got you!

Plan. And Then Plan Some More.

Planning for post-production is part of pre-production. Low budget filmmakers either have to have all the skillsets within themselves, or they need to impeccable plan for the costs incurred in the post process. Having a solid editor is not enough. You will need a sound mixer, a colorist, and in some cases, a VFX specialist. Without these elements in place, the style and quality of your film suffer, at very least from a lack of artistic definition.

Do table reads. Build out your script and get specific with your dialogue. Rehearse. Block. Make choices. Develop. Develop. Develop. Create storyboards. Get granular. Make a look book. You know, be an artist and enjoy the process of filmmaking before you even get on set.

In the age of mobile filmmaking there is really no excuse as to why someone can't create content, but making a feature film á la "Tangerine" (made for 50K) is a triumph. Even if you don't film your entire film on a mobile device, our pocket calculators can do so much for us in the way of filmmaking. There are apps that can be used to replace a traditional slate/clapboard, to capture sound, keep track of the lines and continuity in the script, and more. Do your research. Find free or inexpensive alternatives to traditional ways of doing things.

Build an audience for your film on social media. For some, it can be the bane of existence, but there is no denying the power of self-promotion and the ability to create buzz around something well before it has even taken shape. The fact that filmmakers can be their own publicists, their own advocates in the quest for visibility, and the direct communicators of their vision, is powerful.

Remember... those awarded 25K from WMM will also receive the following:

This is IN ADDITION to the 25K being offered, so think of the possibilities!

Still doubt the possibility of creating a feature film on a 25K budget? Our WMMINTL Film Festival Director, Whit Spurgeon, pulled some films from the last five years that have done well on the festival circuit, garnered many awards, and did not sacrifice quality and substance, despite their low budgets.

"Bloody Nose, Empty Pockets" (2020, Bill Ross IV and Turner Ross, Directors)
This feature from the Ross Brothers, nominated for the Grand Jury Prize/Documentary at Sundance in 2020 and winner of several festival awards around the world, stars Michael Martin as the only professional actor surrounded by an otherwise amateur but compelling cast telling the tale of a fictional final day of a fictional bar in Las Vegas (the film was shot in New Orleans, where the Ross Brothers are based). Combining documentary filmmaking techniques with a staged (though not scripted) narrative, this remarkable film was made for a stunningly low $10,000. The Ross Brothers, in this film and the others they've made over the past 10 years, have an uncanny sense of the drama of the mundane, and all of their films are beautifully shot and edited. Super-high filmmaking quality at an extremely low price.

"The Killing of Two Lovers" (2020, Robert Machoian, Director)
Produced for a measly $32,000, this dramatic thriller is every bit as good as any establishment Hollywood film of the same ilk costing millions -- I personally think even better! Featuring a dynamite cast, this seething domestic drama unfolding against the backdrop of a small town is also beautifully shot. Nominated for the NEXT Innovator award at Sundance, and the John Cassavetes Award at the Film Independent Spirit Awards. A riveting movie made by a filmmaker who understands that storytelling, not money, is the key to great cinema.

"Sign Man" (2021, Reuben Guberek and Luc Hollywood, Directors)
A low-budget comedy/adventure in the vein of 90s indies "Slacker" and "Clerks", with a Scorcese "After Hours" and Coen Brothers' "A Serious Man" vibe. This twisted buddy adventure will receive its Los Angeles premiere at the We Make Movies International Film Festival as our Featured Feature on the opening night of the festival Wednesday, Sept. 8! (Time and ticket info coming soon). Total budget $46,000 ($26,000 in production, $20,000 in post-production).

Written by Sapna Gandhi (with a contribution from Whit Spurgeon)
Sapna Gandhi is an actor, singer-songwriter, and content creator. In addition to TV credits such as BOSCH, SHAMELESS and SCANDAL, she has appeared in numerous shorts, features, and series, including festival darlings IN ABSENTIA (Raindance) and THUMPER (Tribeca). Gandhi has produced several series and films under the umbrella of her production company Elegant Grotesque (most recently SCRAP, starring Anthony Rapp and Vivian Kerr, and Noel Gallagher’s High Flying Birds’ STRANDED ON THE EARTH, directed by Mike Bruce). She is also 1/2 of the musical duo, VATAVARAN, was born in England, raised all over the states, studied English and Women’s Studies, and trained at the American Conservatory Theatre in SF.