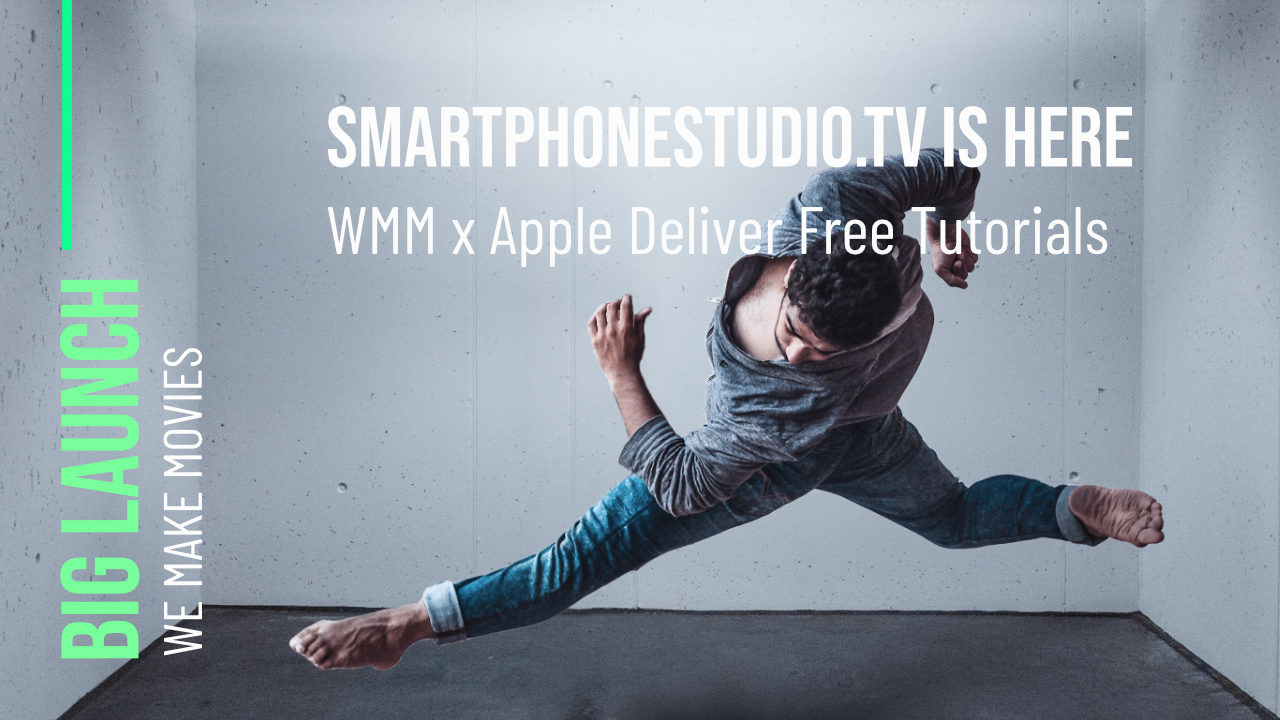 We Make Movies and Apple have banded together once more to launch the new educational platform SMARTPHONESTUDIO.TV, dedicated to teaching you how to shoot, edit and upload professional content using the camera you already have in your pocket. Content creators and filmmakers anywhere in the world can now access 20 free tutorials on shooting with FilmicPro, capturing second source audio with Apogee's MetaRecorder, and editing with Apple’s Final Cut Pro and LumaFusion (by LumaTouch).

Essentially, this is WMM's gift to an international demand for mobile filmmaking. In sharing this high quality, curated information for free, we are making filmmaking accessible to the masses. The tutorials are designed to be an entry level introduction to the fundamentals of content creation with mobile devices, so anyone can jump in with confidence, a strategy,  and minimal stress.
The site is easy to navigate as the tutorials are broken down by capture (all things sound and video),  edit (for Mac or iOS), and explore (various relevant components around the mobile filmmaking ecosystem). The information is built around the in-camera app Filmic Pro (for both iOS and Android), the Apogee MetaRecorder app for sound, Final Cut Pro (for Mac), and Lumafusion (for iOS). The technology is geared towards the Apple hardware system because it integrates well and offers the best workflow, but creators looking to learn the basics of mobile filmmaking can still benefit from the videos. The tutorials are hosted by several enthusiastic and knowledgable hosts, including Smartphone Studio curriculum creators (Aubrey Mozino and Sam Mestman), the team behind Creative Services (Steven LaMorte, Matthew Roscoe, and Amy Schumacher), and our We Uplift The World partners for the eARTh Project (Bijan Machen and Aniko Lichi Szatmari). Apogee MetaRecorder architect Roger Robindore leads one of the tutorials, as does former Compton Smartphone Studio alumna Kiarra Drew.
Smartphonestudio.tv is the second best thing to actually being able to attend the live workshops that have been offered in Los Angeles, Compton, Inglewood, and San Diego (CA), Chicago (IL), St. Louis (MO), Duluth and Jefferson City (MN), to multiple indigenous communities in New Mexico, and most recently internationally throughout Mexico and Central America. It is the encapsulated curriculum shared with such prominent and vital establishments such as SAG-AFTRA and philanthropic organizations such as The Orphaned Starfish Foundation. The site serves as a stepping stone towards a more in-depth and in-person course in whatever region creators would like to invite our team to teach in.
Written by Sapna Gandhi
Sapna Gandhi is an actor, singer-songwriter, and content creator. In addition to TV credits such as BOSCH, SHAMELESS and SCANDAL, she has appeared in numerous shorts, features, and series, including festival darlings IN ABSENTIA (Raindance) and THUMPER (Tribeca). Gandhi has produced several series and films under the umbrella of her production company Elegant Grotesque (most recently SCRAP, starring Anthony Rapp and Vivian Kerr, and Noel Gallagher’s High Flying Birds’ STRANDED ON THE EARTH, directed by Mike Bruce). She is also 1/2 of the musical duo, VATAVARAN, was born in England, raised all over the states, studied English and Women’s Studies, and trained at the American Conservatory Theatre in SF.